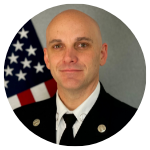 The CPSE Board of Directors has appointed Captain Grant Tinker as a Commission on Professional Credentialing Commissioner representing At-Large.

Tinker is a captain with the Colorado Springs Fire Department in Colorado, an accredited agency through the Commission on Fire accreditation International (CFAI).  Captain Tinker has been with the department for more than fifteen years, working his way through the ranks to Captain in 2020.

Captain Tinker has a bachelor’s degree in Psychology from the University of Northern Colorado and is a graduate of the National Fire Academy’s Managing Officer Program.  Tinker has been honored with several awards and recognition including being named Firefighter of the Year in 2019.

He earned his Fire Officer (FO) Designation in February 2015.