In May of this year, three of the city managers that serve within CPSE’s governance were panelists for a ICMA webinar titled “Developing Excellence in Fire and Emergency Services Departments and Personnel.”  The three webinar panelists were:

ICMA (International City/County Management Association) is one of the two organizations that founded what is now the Center for Public Safety Excellence in the mid-1990s. Over the last quarter century, ICMA members have continued to volunteer their time and talents by serving on the CPSE® Board of Directors, the Commission on Fire Accreditation International® (CFAI), and the Commission on Professional Credentialing® (CPC).

Jeff Pomeranz began by sharing details about the Cedar Rapids, Iowa, Fire Department and highlighting the department’s all-hazards response. He recalled the critical role the department played in responding to the city’s disastrous floods and, more recently, the primary role the fire chief fulfilled as the incident commander for the August 2020 derecho that devasted the community.

He went on to share four tips for developing excellence based on the article he had co-written with his fire chief. Jeff began by illustrating the importance of understanding your community’s unique risk and how the community risk assessment/standards of cover his department developed as part of their accreditation process, allowing the department to have their operations match their unique risk.  He encouraged the webinar attendees to promote based on leadership competencies, stating it was important for him to have a CPC-designated Chief Fire Officer as his fire chief to ensure a well-rounded candidate that would bring experience, education, professional contributions, community involvement and specific leadership competencies to the job. Jeff further discussed how accreditation guided the department in establishing a culture of accountability through the development of benchmarks to track performance and outcomes. He closed his portion of the webinar by recommending to other managers that they trust their fire chief, because the chief, like them, is a public servant and wants to do the best for the community.

Melissa Stevenson-Diaz followed and shared the unique types of calls that the Redwood City, California, Fire Department responds to given their location on the water in the greater San Francisco Bay Area.

Melissa was one of the subject matter experts (SME) that researched and produced the 21st Century Fire & Emergency Services White Paper. This document, an unprecedented collaboration of the ICMA and CPSE, provides a much-needed roadmap for what the fire department of the future should look like. She shared that the SME group worked together over two years to develop this seminal work that considers the societal, technological, economic, environmental, and political forces at play in the local government. Melissa, discussing what she gained through working on the white paper, imparted to the attendees the consideration they should give to the health and wellness of firefighters. 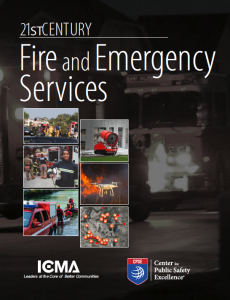 Melissa detailed a key finding from the white paper: how excellence can be achieved through innovation. The three most important ways to facilitate a culture of innovation in the fire and emergency services based on the research conducted for the white paper include: 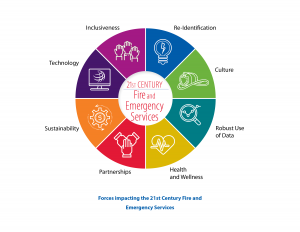 Darin posed a question to the webinar attendees, “If Not Excellence, Then What?” In response, he discussed the City of Fort Collins experience with the Baldridge Excellence Framework and how he believed that the CFAI accreditation model provided a similar framework for the fire and emergency services. Darin shared the data-driven mindset present within PFA and how it drove the department to focus on outcomes rather than outputs and thereby adopt a proactive Community Risk Reduction strategy. Continuing to focus on strategy, he stated that a robust strategy was most successful when coupled with a culture of innovation as evidenced by PFA’s community-driven strategic plan that relied on external stakeholder input and internal stakeholder ownership.