Following the virtual Excellence Conference in 2021, it was so great to be back in-person. With over 700 in attendance, we set another record. What made it even more special is that this is the first opportunity that we have all had to get together in two years – the 2020 Excellence Conference was held just before the pandemic shut everything down. 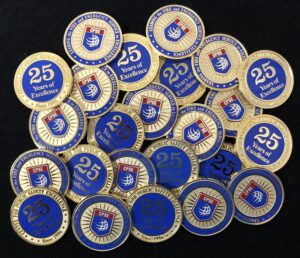 A landmark moment for CPSE is celebrating the 25th Anniversary of the organization. To commemorate this milestone, all conference attendees received a special 25th anniversary challenge coin.

To celebrate our 25th Anniversary, we put together a series of videos called The Faces of CPSE comprising individuals from CPSE’s past and those that represent CPSE’s future. You can see all of the videos by clicking here, as well as the one below. 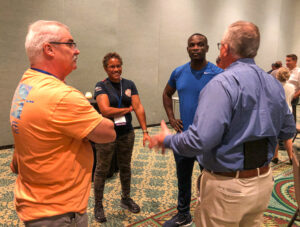 First-timers had a chance to talk with CPSE staff at a special reception on Monday evening.

We had a record number of 345 people attending the conference for the first time. On Monday evening, we held a reception to welcome them to conference and to help them get familiar with the CPSE community of agencies and officers. 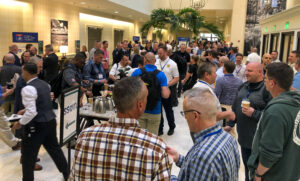 Networking is always a key part of every Excellence Conference, and this year was no exception. While there are a lot (a lot!) of great education sessions, the opportunity to talk with others from across the world and exchange ideas is really what makes these in-person conferences such an invaluable experience.

Joint Board and Commission Meeting

On Monday, meetings were held that brought together the CPSE Board of Directors and the commissioners from the Commission for Fire Accreditation International (CFAI) and Commission for Professional Credentialing (CPC). This is an opportunity for all the CPSE governance members to brief each other on their activities and to get corporate updates from CPSE staff.

The meeting provided the perfect time to recognize the hard work of several Board and Commission members for their service. 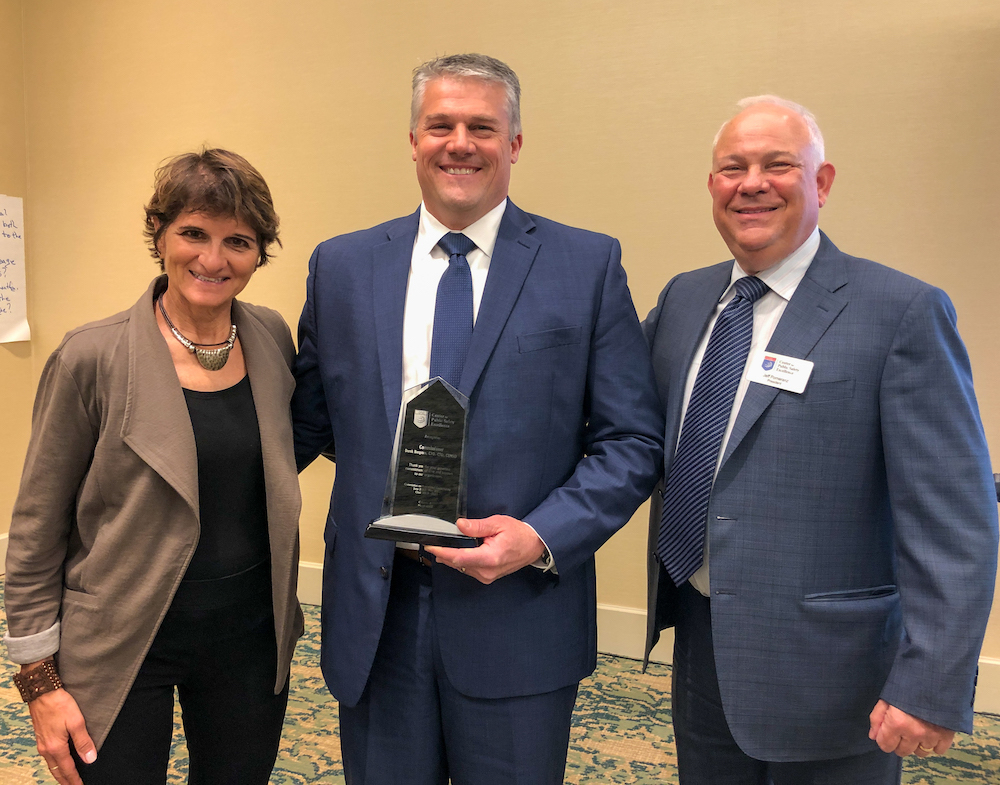 Chief Derek Bergsten, CFO, CTO, CEMSO, being recognized for his service to the CPC by CPSE Board Vice President Mary Cameli (CFO) and President Jeff Pomeranz. 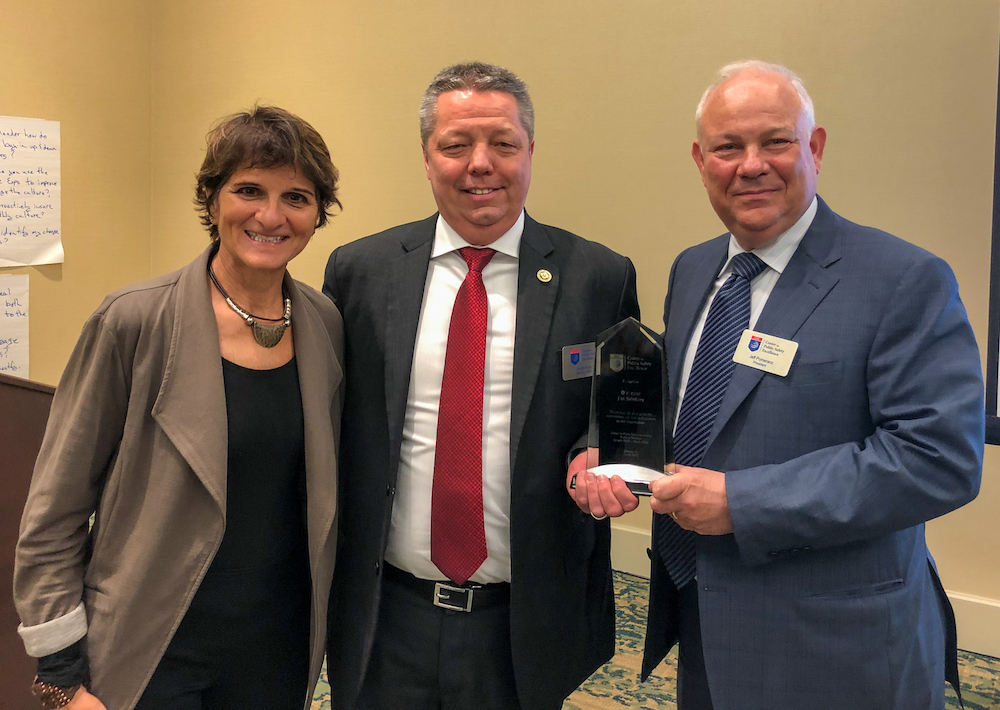 IAFF Chief of Operations Jim Brinkley being recognized for his years of service representing the IAFF on the CPSE Board of Directors by Vice President Mary Cameli (CFO) and President Jeff Pomeranz. 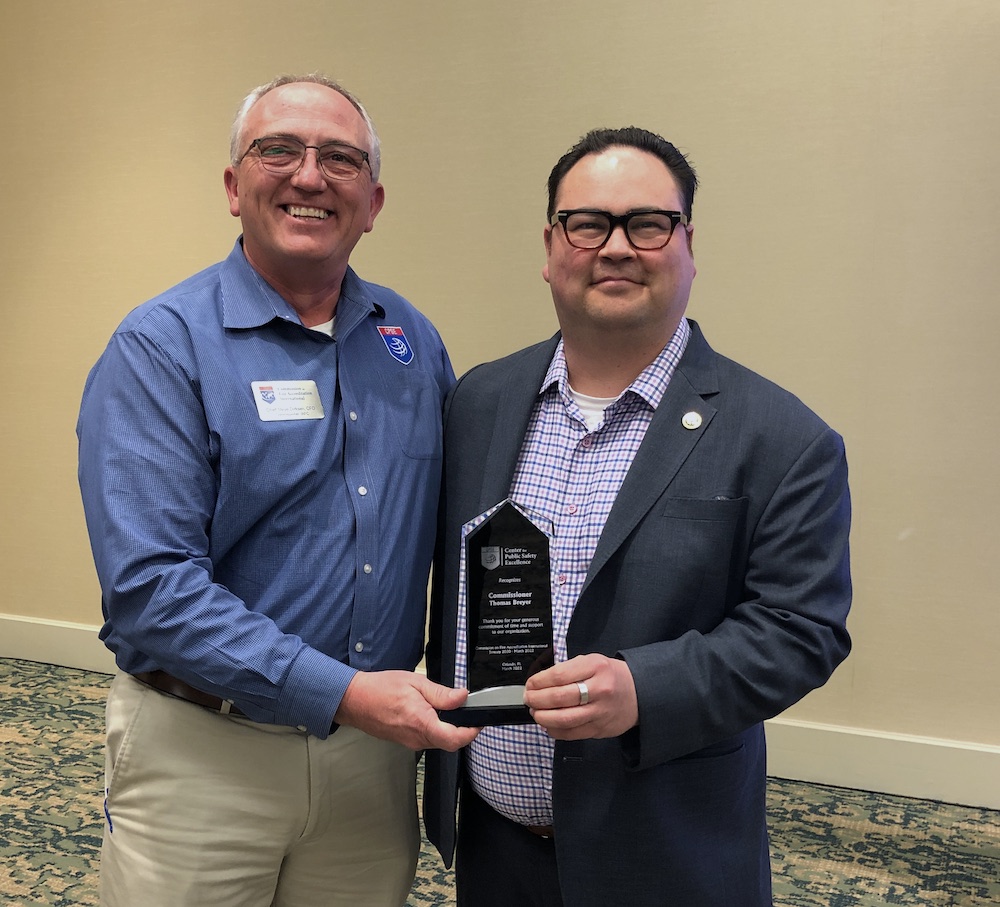 IAFF Assistant to the General President Thomas Breyer was recognized for his time on the CFAI Commission as he moves to the CPSE Board of Directors representing IAFF by CFAI Commission Chair Steve Dirksen, CFO. 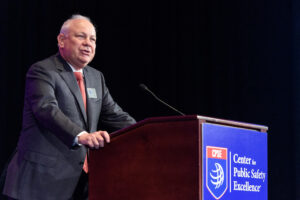 The conference kicked off with a welcome from the CPSE Board President, Jeff Pomeranz, City Manager, Cedar Rapids, Iowa. In sharing the theme of the conference, Resiliency and Reinvention, President Pomeranz shared “for all of us in local government and fire and emergency service, the last two years have been a testament to our resiliency and our ability to reinvent.” He continued by saying “I am happy to report that the Center for Public Safety Excellence has not only survived but thrived over these last two years.”

A testament to CPSE’s accomplishments can be found in the 2021 Annual Report. Some highlights include:

…and more. You can read the entire report, as well as previous Annual Reports, by clicking here.

A high point of the opening session is presenting the annual CPSE awards to individuals and organizations that embody the mission and vision of CPSE and have made a significant difference to their department, community, and the greater fire and emergency service. 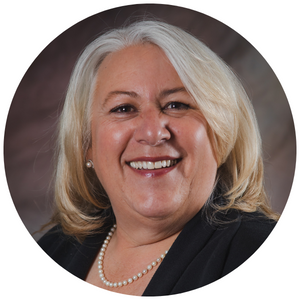 The recipient of the 2022 CPSE Ray Picard Award is Senior Management Analyst Norma Jean Valdez with the Los Alamos County (NM) Fire Department, a CFAI Accredited Agency. Ms. Valdez has been involved with accreditation since the beginning, when Los Alamos was selected as a beta site for the accreditation process. According to one of her colleagues, she has since been continually a part of the department’s accreditation, having “vision, dedication, heart, balance, determination, and the desire for continuous improvement to keep LACFD’s accreditation quest alive and striving, always being the one to carry that torch towards success.” Ms. Valdez serves as a champion of the accreditation process, both in New Mexico and beyond, and exemplifies the spirit of Ray Picard in receiving this award. 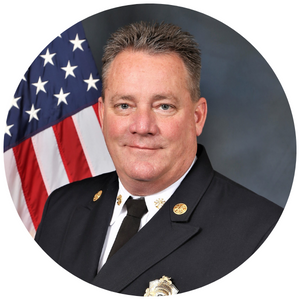 Deputy Chief Jeff Lucas, CFO, FM, is this year’s recipient of the Ronny Jack Coleman Leadership Legacy Award. As a Deputy Chief with Fort Lauderdale (FL) Fire-Rescue, a CFAI Accredited Agency, he has served as a mentor for a number of his officers within the department who are seeking credentialing through CPSE. He has given his time to help them prepare and review their applications on their paths to designation and has encouraged a process of self-assessment to bring out the qualities of achievements in others.

Outside of his department, he has served as a champion for professional development and provides mentoring for personnel seeking CPSE designation. He serves as a CPC Peer Reviewer and a CFAI Peer Assessor.

The City of Riverside (CA) Fire Department, a CFAI Accredited Agency, is the recipient of the 2022 CPSE Randy R. Bruegman Agency Innovation Award.

In the early days of COVID-19, in 2020, Riverside was faced with the same problem as cities across the nation – how to decontaminate offices and work areas that had been occupied by workers that tested positive for COVID-19. Initially, one employee’s workspace was cleaned by a private vendor at a cost of $40,000, but this was clearly an unsustainable solution.

The fire department’s hazardous materials team identified an alternative using a combination of a decontamination solution that is used for chemical, biological, radiation and nuclear (CBRN) incidents and ultraviolet lights. The initial startup cost was approximately $3,700, and the department’s hazmat team was able to clean all 14 fire stations as well as City Hall, saving the city millions of dollars. 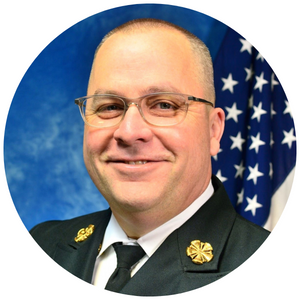 The Cliff Jones Ambassador Award recognizes an individual who goes above and beyond in their support of accreditation, credentialing, and CPSE as a whole.

Within the past several years, Chief Kujawa has encouraged other departments around the county to follow the CPC philosophy because he understands the value it brings to the department and ultimately the community.

Chief Kujawa is an active member of the Ohio, Michigan, Indiana, and Kentucky Consortium. He has provided professional development for others beyond his own agency through mentoring as an advocate for the credentialing and accreditation process. He continues to serve as a CPC peer reviewer and a CFAI peer assessor.

In 2016, CPSE created the Michael Worthington Scholarship in continued remembrance of our long time Board member and friend, who passed away September 25, 2015. Annually, CPSE awards up to five scholarships. Recipients of the scholarship earn their Fire Officer (FO) designation and have their initial application fees as well as the registration fee to attend the CPSE Excellence Conference waived. This year’s recipients were: 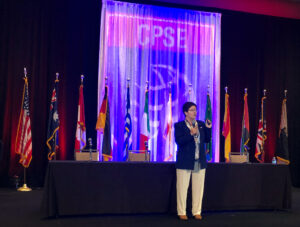 We were very honored to be able to have U.S. Fire Administrator Dr. Lori Moore-Merrell give the keynote presentation. Dr. Moore-Merrell has a long history with CPSE having served as a CFAI commissioner for nine years and as a Director on the CPSE Board of Directors for eight years. 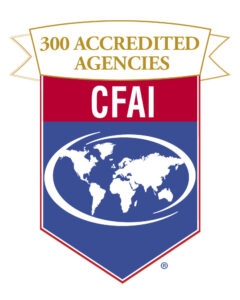 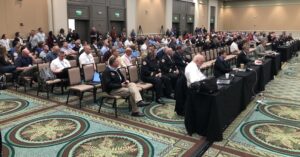 This year’s conference brought back the first in-person accreditation hearings in two years. A total of 20 agencies, including eight first time, appeared before the CFAI Commission, and all were granted accreditation. For the first time in the organization’s history, we have reached 300 accredited agencies (#CFAI300) Read more about this milestone at www.cpse.org/cfai300.

One of the core tenets of CPSE’s mission is education, and the Excellence Conference provides just that opportunity. With a revamped schedule, the Excellence Conference provided an opportunity to attend over 70 education sessions in five different tracks: Accreditation, Credentialing, Leadership, Resiliency, and Reinvention. Click here to see the full list of sessions. 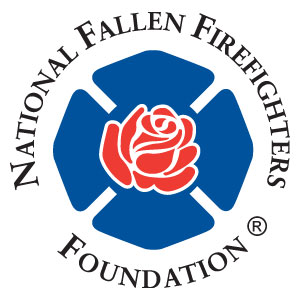 CPSE has been a long-time supporter of the National Fallen Firefighter Foundation, and as part of its 25th Anniversary, CPSE made the commitment to raise and donate $25,000 to the Foundation. As part of the campaign, CPSE will donate $25 for each registration to the 2022 conference.

We are encouraging everyone to help us in reach our goal by donating at least $25.00 by clicking here!

A strong part of the networking throughout the year are the State and Regional Consortiums where people can get together to share ideas and strategize on how to make their departments better through continuous improvement. This year we were able to host those consortiums wanting to meet at the end of the conference day. 11 of the 19 consortiums took advantage of this opportunity. This also provided the opportunity for CPSE staff to meet with them in-person and learn more about the challenges they face and how CPSE can support their continuous improvement efforts. 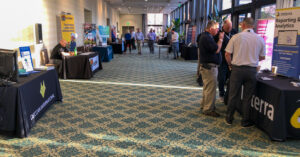 A huge thank you to the 20 sponsors and exhibitors of this year’s Excellence Conference. Attendees were able to spend time in the exhibit hall on Tuesday and Wednesday to speak with industry-relevant companies and learn more about what they have to offer through their cutting-edge services and products. You can learn more about them by clicking here .

Some of our sponsors, choose to be part of the Tech Sessions on the first day of conference.

Before we know it, 2023 will be here! We are back in Orlando, FL so mark the dates – February 28 to March 3, 2023. Do you have a program that you might want to present? Now’s the time to start thinking about it and preparing for the Call for Presentations! Follow us on Facebook, Twitter, and LinkedIn where we will be making announcements later in the year – and see you in Orlando!